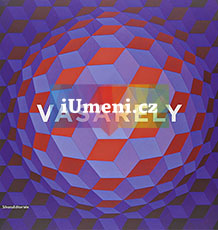 Long before there were such terms as Op art or Kinetic art, Victor Vasarely (1906–1997) was making abstractions that dazzled the eye with their chromatic boldness and energetic geometries. His painting "Zebra," of 1930, is widely considered the first work of Op art. The Hungarian-born Vasarely settled in Paris in 1930, working as a graphic designer (a calling whose requirement for clarity and precision permeated his art). From early on, Vasarely favored biomorphic shapes, sharp edges, two-dimensional space and a limited palette, but it was in the early 1950s that his canvases began to articulate the extreme rigor for which he became famed. In the 1960s he pursued printmaking, in an effort to make his work more democratically available. With almost nothing on this Op art pioneer currently in print, this volume offers an important opportunity to rediscover Vasarely’s rich and radically modern art..
Silvana