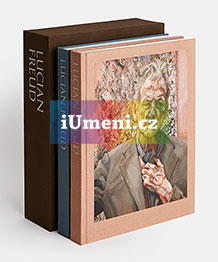 With more than 480 illustrations, this is the most comprehensive publication to date on one of the greatest painters of the twentieth and early twenty-first centuries, Lucian Freud.

Lucian Freud was one of the most significant artists of the twentieth and early twenty-first centuries, and Phaidon is honoured to publish the most complete retrospective of his career to date.

This sumptuous, definitive set is the result of an extraordinary collaboration between David Dawson – Director of the Lucian Freud Archive and for two decades Freud’s assistant, model, and friend – author Martin Gayford, and editor Mark Holborn.

Their collaboration has resulted in a book that goes beyond the work to reveal insights into the man himself. Gayford describes Freud’s determination always to tell the truth about what he was recording in paint. He believed in a found beauty, not one that was imagined by an artist and then imposed on his subject. He painted what he saw, in exquisite detail, and he found it beautiful.

With more than 480 illustrations, Phaidon celebrates that beauty – evoked in portraits of Freud’s friends and family, his lovers, his neighbours, and others whose looks he liked, from his bookmaker to a bank robber.

This is both a vital contribution to art scholarship and a gorgeous addition to the bookshelves of art lovers around the world.

Martin Gayford is a writer and art critic for The Spectator magazine. He sat for a portrait by Freud in 2003-5, an experience he recounted in Man with a Blue Scarf (2010).

Painter David Dawson is represented by Marlborough Fine Art, London. He was Freud's assistant from 1991 until his death, and a frequent model for his paintings.

Mark Holborn is an editor, designer, and writer who has worked with many leading artists over the last 30 years..
Phaidon