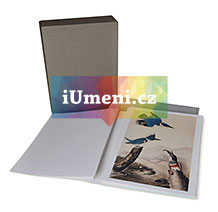 Edition de la Main Fleurie (France) 2004. Loose leaf binding. Hardcover with olive green linen clamshell case.
The portfolio is composed of 244 pages with full page illustrations in a limited edition of 2500 copies. Individual Reproductions of 48 paintings by the artist, including some from “Birds of America” and also early works recently rediscovered in the National History Museum of La Rochelle.

BOOK DESCRIPTION:
John James Audubon (Jean-Jacques Audubon) (April 26, 1785 – January 27, 1851) was a French-American ornithologist, naturalist, and painter. He was notable for his expansive studies to document all types of American birds and for his detailed illustrations that depicted the birds in their natural habitats. His major work, a color-plate book entitled The Birds of North America is considered one of the finest ornithological works ever completed. Audubon identified 25 new species and a number of new sub-species.
His love for birds started at a very early age. To say he was talented was an understatement. In France, during the chaotic years of the French Revolution and its aftermath, the young Audubon grew up to be a handsome and gregarious man. He played flute and violin, and learned to ride, fence, and dance. A great walker, he loved roaming in the woods, often returning with natural curiosities, including birds’ eggs and nests, of which he made crude drawings.
However, he was not fond of of mathematics or navigation. Coupled with the fact that he was prone to seasickness, made him unfit to be a seaman. Much to his fathers disappointment. This was a blessing for young Audubon for he was cheerfully back on solid ground and exploring the fields again, focusing on birds.
In this collection of his works, created by French author, Pascal Jeanjean, showcases not only the magnificent of his drawings, but the release of his letters to his wife, Lucy Audubon. Letter that would also act as his journals, from his travels to the people that he would meet on his journeys.
There are also letters addressed to his friend, Reverend John Bachman.
The book produced according to the traditional form of modern bibliophily has in total, over 40 letters written by James Audubon, and a total of 48 drawings of birds, each letter containing one or two drawings of birds that he has seen on his travels.
Each piece, photographed by using a large, high-resolution Lumi?re Technology scanner. The Jumboscan™ six-band multi-spectral scanner is coupled with a spectrometer. It can capture very nearly the complete spectrum of colors (95% instead of the 50-70% as captured previously with numeric or silver processes.) and lovingly printed on special 300-gram Main Fleurie paper.
Each photo, taken at such high resolution coupled with the special 300-gram Main Fleurie paper ensures that it is no longer possible to detect the differences between the reproduction and the original watercolor prints.
This is a magnificent piece of French history and a wonderful collection item for any French historian or