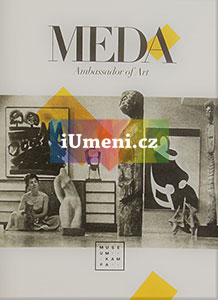 Meda Mládková, life-long supporter and promoter of modern art and lifestyle is an inspiring personality. This year, she is celebrating her 100th anniversary. During her life in the United States she built, together with her husband Jan Mládek, one of the most important collections of Central European art. MEDA Ambassador of Art, autor Pavel Liška a Robin R. Mudry.

The exhibition presents the exciting life of these Czech
patrons in America, but also their house, which became
a salon of Czechoslovak and Central European art and
culture. The Mládeks’ home in Georgetown,
Washington was a meeting place for artists,
intellectuals, and other personalities, as well as a bridge
that connected the world behind the Iron Curtain with
the West and introduced the West to the cultural
wealth of the Eastern Bloc countries. This unique
combination of art, architecture, fashion and design
created an unprecedented space – the forerunner of
today’s Kampa Museum.