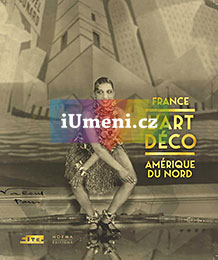 With the International Exhibition of Modern Decorative and Industrial Arts in 1925, Art Deco seduced the world. From New York to Paris, the press celebrated this event which permanently imposes this universal style. Crossing the Atlantic aboard sumptuous liners such as Île-de-France and Normandy, main French decorators such as Jacques-Émile Ruhlmann, Jean Dunand and Pierre Chareau exhibited in department stores, from New York to Philadelphia. L'Art Déco - France Amérique Du Nord), autor kolektiv.

From Mexico to Canada, this enthusiasm is driven by North American architects trained at the School National Museum of Fine Arts in Paris from the beginning of the 20th century, then at the Art Training Center in Meudon and at the Fontainebleau School of Fine Arts, two art schools founded after the First World War world which strengthened the links between the two continents.

This book reveals a reciprocal emulation which is illustrated in the architecture and ornamentation of skyscrapers as well as in cinema, fashion, press, sport...

Thirty-seven texts and 350 illustrations make it possible to discover the unique links that unite France and America, from the Statue of Liberty by Bartholdi to the Streamline which succeeds Art Deco..
neuveden