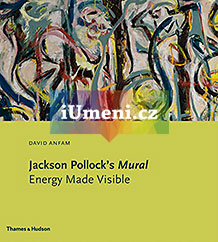 Jackson Pollock’s Mural, created early in his career in 1943, is a vast panorama spanning a 6-metre-long canvas – the largest painting he ever made. Mural marked a watershed for Pollock: a presentiment of the epic scale, complexity, energy and ambition of the work ahead.

This monumental painting is one of the most influential yet little-seen works of the last century. This book sheds new light on its place in the artist’s meteoric career and the evolution of modern American art.

David Anfam considers the many influences on Pollock that led to this landmark achievement – including the context of the American West, his little-known relationship with Clyfford Still and the importance of wartime action photography. He also traces the explosive magnetism Mural exerted over the emergent Abstract Expressionists and its legacy for painters and sculptors as diverse as Mark Rothko, Robert Motherwell, David Smith, Richard Serra and Brice Marden.

David Anfam is a writer, curator and leading authority on modern American art. He is the Senior Consulting Curator at the Clyfford Still Museum in Denver and the Director of its Research Center. His publications include Abstract Expressionism, the catalogue raisonné Mark Rothko: Works on Canvas, which won the Mitchell prize in 2000, as well as studies on Anish Kapoor, Edward Kienholz and Wayne Thiebaud. This book accompanies an exhibition, also curated by the author, at the Peggy Guggenheim Collection in Venice and other venues..
Thames & Hudson