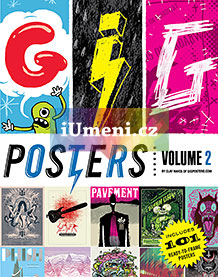 Readers gave the first Gig Posters anthology a standing ovation—so for your viewing pleasure, here’s one heck of an encore: 700 more incredible posters from the archives of GigPosters.com, the Internet’s premier destination for concert poster art. It’s a mad jam of illustration and photography, collage and typography, bringing the contemporary music scene to exciting visual life for a generation of fans who’ve grown up in the post-album-art era.

You’ll also find 101 perforated and ready-to-frame posters promoting the most dynamic musical acts of the twenty-first century, from the Black Keys, Flight of the Conchords, Ice-T, and My Morning Jacket to Norah Jones, the Avett Brothers, Coheed & Cambria, and many, many more.

It’s an awesome compendium of pop-art-history in the making—and it’s also just what the walls of your apartment or office have been waiting for..
neuveden