Expressionism. A Revolution in German Art 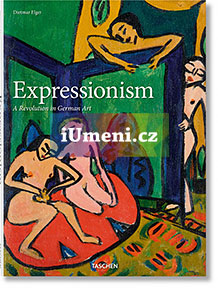 Amid a frenzy of lurid color and distortion, discover a calm, authoritative overview of German Expressionism. From the leading collectives of Die Brücke and Der Blaue Reiter to regional schools and lesser known artists, Dietmar Elger leads us through the protagonists and principles of this vivid 20th-century movement—its stylistic cacophony, its rage against bourgeois values, and its tussle with modern industrial reality.

German Expressionists were uneasy and angry. Emerging at the dawn of the 20th century, they railed against Christian and bourgeois values as much as rampant urban industrialization. Anti-imperialist, they were dispersed, shattered, and depleted by the horrors of the First World War, and rallied their efforts only to be officially erased by the Nazi “Degenerate Art” exhibition of 1937.

In this comprehensive TASCHEN collection, Head of the Gerhard Richter Archive Dietmar Elger gathers the many artists and elements of this urgent, scattered, complex movement into one authoritative overview of its protagonists, principles, and essential role in 20th-century modernism. Finding a critical calm amid the frenzy of color and distortion, the book distills Expressionism’s leading collectives, Die Brücke and Der Blaue Reiter, as well as its regional characteristics across its Berlin and Munich hubs, and its North German, Rheinland, and Viennese variants..
Taschen