A Life of Picasso Volume IV. The Minotaur Years 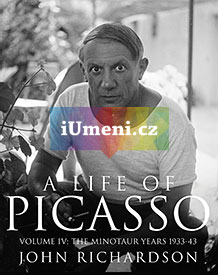 The Minotaur Years opens in 1933 with a visit by the Hungarian-French photographer Brassai to Picasso's château in Normandy, Boisgeloup, where he would take his iconic photographs of the celebrated plaster busts of Picasso's lover Marie-Thérese Walter. Picasso was contributing to André Breton's Minotaur magazine and spending time with the likes of Man Ray, Salvador Dalí, Lee Miller, and the poet Paul Éluard, in Paris and the south of France. It was during this time that Picasso began writing surrealist poetry and became obsessed with the image of himself as the mythic Minotaur..
neuveden