San Francisco. Portrait of a City 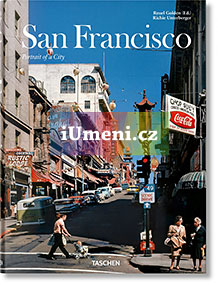 Since the mid-1800s, San Francisco has attracted artists, free spirits, dreamers and entrepreneurs. With nearly 500 pages of stunning images sourced from dozens of archives and collections, this volume depicts the city from its earliest history to the present day. San Francisco. Portrait of a City, autor Richie Unterberger, Reuel Golden.

An epic pictorial history of the City by the Bay Starting with an early picture of a gang of badass gold prospectors who put this beautiful Northern California city on the map, this ambitious and immersive photographic history of San Francisco takes a winding tour through the city from the mid–nineteenth century to the present day.

Enjoy eye-catching views of the city’s most enduring landmarks and symbols: the Golden Gate Bridge, Chinatown, the picturesque trams that wind up and down the famously steep hills, the popular waterfront, its beautiful bay, and its spectacular cityscapes and vistas. San Francisco’s counterculture movements that shaped our collective consciousness are also featured prominently: the beats of North Beach, the hippies of Haight-Ashbury, the gay communities of Castro, and the Black Panthers of neighboring Oakland. Some of the city’s most famous residents also make appearances: Robin Williams, The Grateful Dead, Angela Davis, Janis Joplin, Sylvester, and Allen Ginsberg, among others..
Slovart