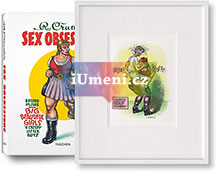 Now Crumb has selected his most intimately revealing comic strips and single page drawings to create a 258 page encyclopedic trip through his sexual psyche. All images were created between 1980 and 2006, and all strips are hand-colored for a lush vibrancy never seen in his comic books. In total the book features 14 complete stories, including My Troubles With Women, If I Were a King, A Bitchin’ Bod, and How To Have Fun With a Strong Girl, as well as 60 single page drawings.

The artist admits it’s a little scary to see his most fevered obsessions collected end to end like this, but fans will find Robert Crumb’s Sex Obsessions a fascinating peek inside an often tortured, always brilliantly talented mind, as well as an unparalleled collector’s item.

This signed limited edition of 1,000 copies is a work of art in itself, with every part of the book—front and back covers, spine, and introductory pages—created for this project by Robert Crumb. Each book also comes with a pigment print by Mr. Crumb.
Contributors
The artist