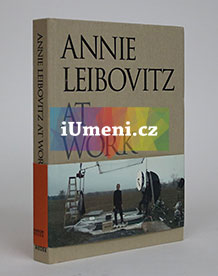 Annie Leibovitz, our most celebrated living photographer, explains how her pictures are made Annie Leibovitz. At Work (first edition), autor Leibovitz Annie.

Leibovitz addresses young photographers and readers interested in what photographers do, but any reader interested in contemporary history will be fascinated by her account of one of the richest bodies of work in the photographic canon. The subjects include photojournalism, studio work, photographing dancers and athletes, working with writers, and making the transition from shooting with film to working with digital cameras. Originally published in 2008, this revised and updated edition brings Leibovitz's bestselling book back into print.

Annie Leibovitz is one of the most influential photographers of our time. For nearly five decades, her distinctive portraits have appeared on the covers of Rolling Stone, Vanity Fair, and Vogue. She is a Commandeur in the French government's Ordre des Arts et des Lettres and has been designated a Living Legend by the Library of Congress. Her work is exhibited in museums all over the world..
Argo