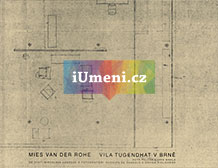 An extensive body of literature exists concerning Villa Tugendhat including single monograhs. The idea behind this publication was the need to investigate the state of the structure from the perspective of an architect, specifically an architect who was well acquainted with the building due to having been involved in the recently completed renewal and restoration work. Mies van der Rohe - Vila Tugendhat in Brno, autor Ivan Wahla a Petr Pelčák.

The motivation behind the present work was an interest in unveiling how Mies van der Rohe arrived at his radically new concept of the typology of a living space and at the same time the ability to carry out his vision in such a formally and technically supreme manner.
The work on the plans for the reconstruction, carried out the basis of research on the structure and comparisons with the initial completed appearance on the basis of the original drawings, brought with it, apart from new information concerning the construction approach to the house, new knowledge about the approach to solving thouse issues which the new project was faced with, thereby making it possible to observe the architectural thinking and designing craft of its author.

The aim is thus not to create another extensive monograph on the Villa. The established facts are consequently only given when they are of use in understanding the given angle of perspective. This consists of the genesis of the radical architectural thinking and its implementation on the specific building. The current work is thereby an attempt at analysing both Mies´previous and later work from the perspektive of Villa Tugendhat.

This contribution to the literature dealing with the Brno Villa is conceived as a case study. The pictorial part should therefore serve to reach an understanding and study the design of the structure as a whole as well as in terms of its defining details. Of great interest is not only its creation, but also the ongoing life of the concept of the structure, and therefore there was a need to include period responses and further developments in the architectural work of Mies..
Obecní dům Brno

Název publikace: A Guide to the Architecture of Brno450 Kč