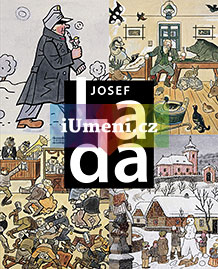 The first presentation in book form of Josef Lada (1887-1957) as a major exponent of Central European art of the 20th century, and consequently also a master of world painting. This full-colour pictorial monograph is conceived around the premise that his perennial attachment to quintessentially Czech motifs, the Bohemian landscape, as well as Czech traditions and myths, was essential in enhancing the individuality of his output. Josef Lada. A 20th-century Central European master, autor Lev Pavluch.

In an introductory essay followed by ten thematically focused illustrated chapters, the author of this book documents both Josef Lada´s affinity with many leading figures of world culture (including not only artists), and the uniqueness and exceptionality of Lada´s painterly idiom. The artist´s greatness is seen as stemming primarily from his intrinsically defined creative method which accounts for the overall spirit of harmony emanating from his works and assigning him the status of an artist of worldwide import. Hence for instance the juxtaposition, in the final section of the book, of the phenomenon of "Ladian winter" alongside some of the most illustrious individual motivic characteristics found in the history of world art - a company to which Lada´s paintings prove fully equal. This innovative book, published simultaneously in Czech and English, is rounded off by a detailed biographical timeline which - like the rest of the contents - takes due account of the international readership..
Slovart