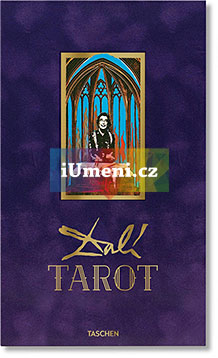 Deck of 78 tarot cards with booklet in box

Dalí poses as the Magician, his wife Gala becomes the Empress, and the death of Julius Caesar is reinterpreted as the Ten of Swords in the artist’s extraordinary custom tarot deck. First published in a 1984 limited edition that has since long sold out, this lush box set brings back all 78 cards, each dazzling in color, along with a companion book on the making-of and practical instructions.

Legend has it that when preparing props for the James Bond film Live and Let Die, producer Albert Broccoli commissioned Surrealist maestro Salvador Dalí to create a custom deck of tarot cards. Inspired by his wife Gala, who nurtured his interest in mysticism, Dalí eagerly got to work, and continued the project of his own accord when the contractual deal fell through.

The work was published in a limited art edition in 1984 that has since long sold out, making Dalí the first renowned painter to create a completely new set of cards. Drawing on Western masterpieces from antiquity to modernity (including some of his own), Dalí seamlessly combined his knowledge of the arcane with his unmistakable wit. The result is a surreal kaleidoscope of European art history..
Taschen